When facing a job or career change, some struggle with the transition and others thrive. For Josey, a six-year-old Clumber Spaniel, it was the latter when she switched from search-and-rescue work to the Junior Showmanship ring.

“She has an incredible work ethic and exemplifies a breeder’s goal of a sound mind in a sound body,” says owner-handler Jody Davidson, of Cave Creek, Ariz., who has shown dogs for 55 years. According to Davidson, Josey is the first in the breed’s history to be certified in Search and Rescue (SAR) and was deployed over a dozen times with the Los Angeles Police Dept. They trained 10 to 15 hours weekly and traveled more than 12,000 miles annually for trainings and call-outs (requests for SAR from law enforcement). Once certified, call-outs varied from one to two a week, but occasionally, they’d get two in one night. 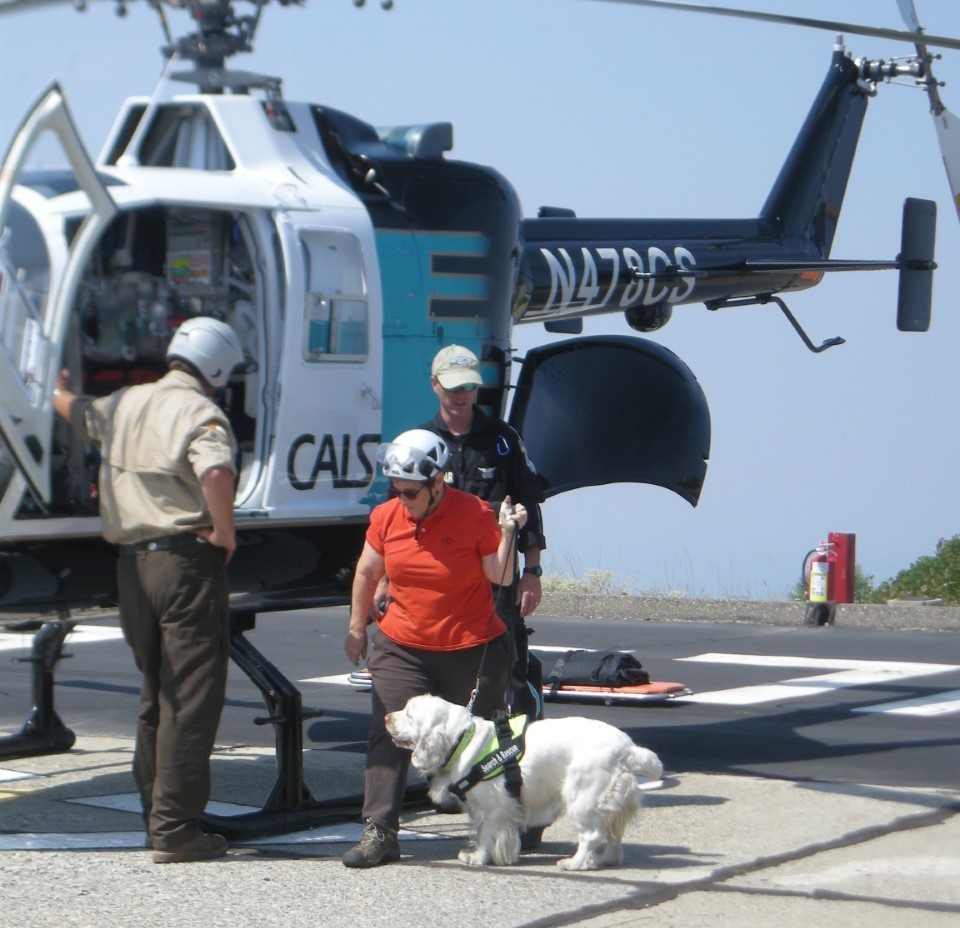 Owner-handler Jody Davidson of Cave Creek, Ariz., and Josey engage in the helicopter phase of their Search and Rescue training near Lake Tahoe, Calif. Dogs and handlers must be able to “hot load” into a helicopter with the rotors spinning. Photo by Scott Davidson.

All of that came to an end last year due to Davidson’s recurring health issues. After she had to give up SAR work, Davidson soon found a new job for 65-pound Josey — working with a dozen aspiring Junior Showmanship kids.

The pair has plenty to offer Juniors. Davidson has bred, owned, or co-owned more than 70 champions in 15 different breeds — representing all seven American Kennel Club groups — as well as trained more than 20 competition dogs to their Companion Dog, eight to Companion Dog Excellent, and four to Utility Dog titles.

Davidson was a licensed AKC judge approved in Junior Handling, and she founded and taught a Junior Handling group in Las Vegas, Nevada. Davidson says this group was the first in the nation to include disabled youth competitors, many of whom showed from wheelchairs. Consequently, when her medical disability forced her retirement from SAR work, it was only natural that she returned to Junior Handler activities.

She had started competing in Junior Showmanship at age 11, exhibiting what she describes as “the world’s ugliest Maltese, Mikey.” No one in her family was involved in the sport, but she was mentored by Aennchen Antonelli, a top Maltese breeder in the country.

For decades, Davidson taught young people in other capacities: as a certified elementary education teacher, and as a director of both community and professional youth theaters.

“It seemed like a perfect fit — teaching children and dog shows,” she shares. “As I believed the future of theater lay in the creation of new artists and audiences, I also recognized that the future of purebred dogs is in the development of enthusiastic and committed new breeders and exhibitors.”

Davidson continues, “I started working with Juniors in Arizona and was approached by the mother of a young autistic girl, Talia, whom I met earlier when I taught a class on dog handling at a summer camp. Talia loved dogs and longed to try competing. I lent her Josey and began working with her.”

Instead of payment, she allowed Talia to perform chores at her training facility — a practice she continues with other students. These tasks involve everything from poop scooping to scrubbing water buckets. They also learn how to trim nails, bathe, blow, and groom dogs, administer medicines, road-work dogs (training them to trot alongside a bike or vehicle), leash train, and socialize puppies. 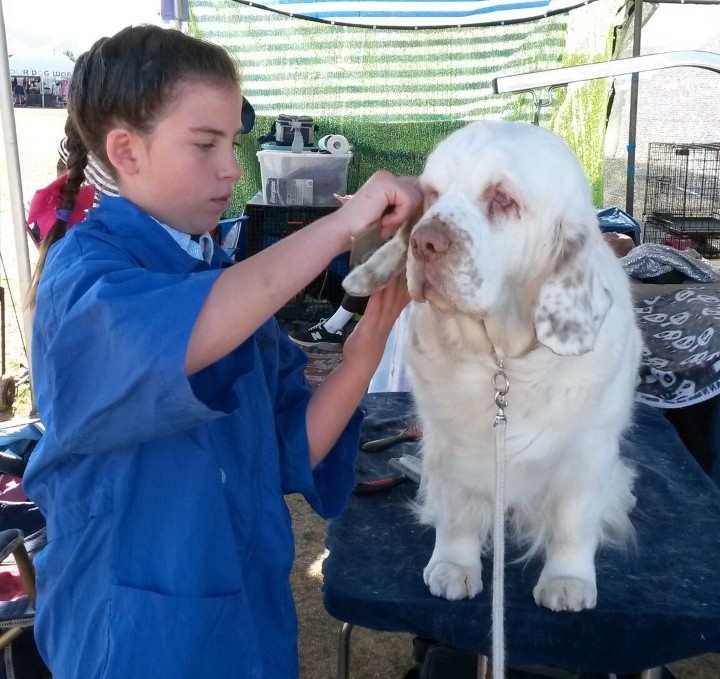 Junior handler Talia Dahan of Anthem, Ariz., prepares Josey for the show ring at the Scottsdale Kennel Club show in 2016. Davidson requires Juniors, regardless of age, to bathe, groom, and trim their own dogs. Photo by Jody Davidson.

When Davidson began working with Talia in early 2015, the youngster was shy and withdrawn. Originally, the 10-year-old was slated to show Davidson’s Doberman Pinscher, Maisie, but two weeks before Talia’s first show, Maisie died of cancer. Josey became a last-minute replacement and quickly morphed into becoming Talia’s best friend and partner.

“Talia started showing in the fall,” recalls Davidson, “but couldn’t manage to ask the steward for her armband number. She wouldn’t look at the judge, and even something as simple as smiling was nearly impossible. However, as she continued to show we were able to gradually move her outside of her comfort zone and expand interaction. I made her at least say ‘Hi’ to the other Juniors, and when she received a ribbon, I made her look the judges in the eye, shake their hand, and thank them loudly enough that I could hear it ringside.

“As she began winning and moved on from Novice, I required that she send the judge a thank-you note. The more she won, the more confident she became. It wasn’t long before she began to show another Clumber, Eliza, in breed competition, sometimes winning the breed class over professional handlers.”

By early spring 2016, Talia qualified for the AKC National Championship in Orlando, Fla., but decided not to compete after joining her school’s volleyball team. Davidson shares, “Her social life became so active that there wasn’t time for dog shows. That was fine, though. The goal was never to make her a professional handler. The goal was to use Josey as a bridge for Talia to a social world. And it worked beautifully.”

Since Talia’s retirement, Josey has been shown by more than a half-dozen other Juniors and used in classes by many others. She partnered first-time handlers through their initial show ring experience, and even helped one student win Best Junior Handler honors. 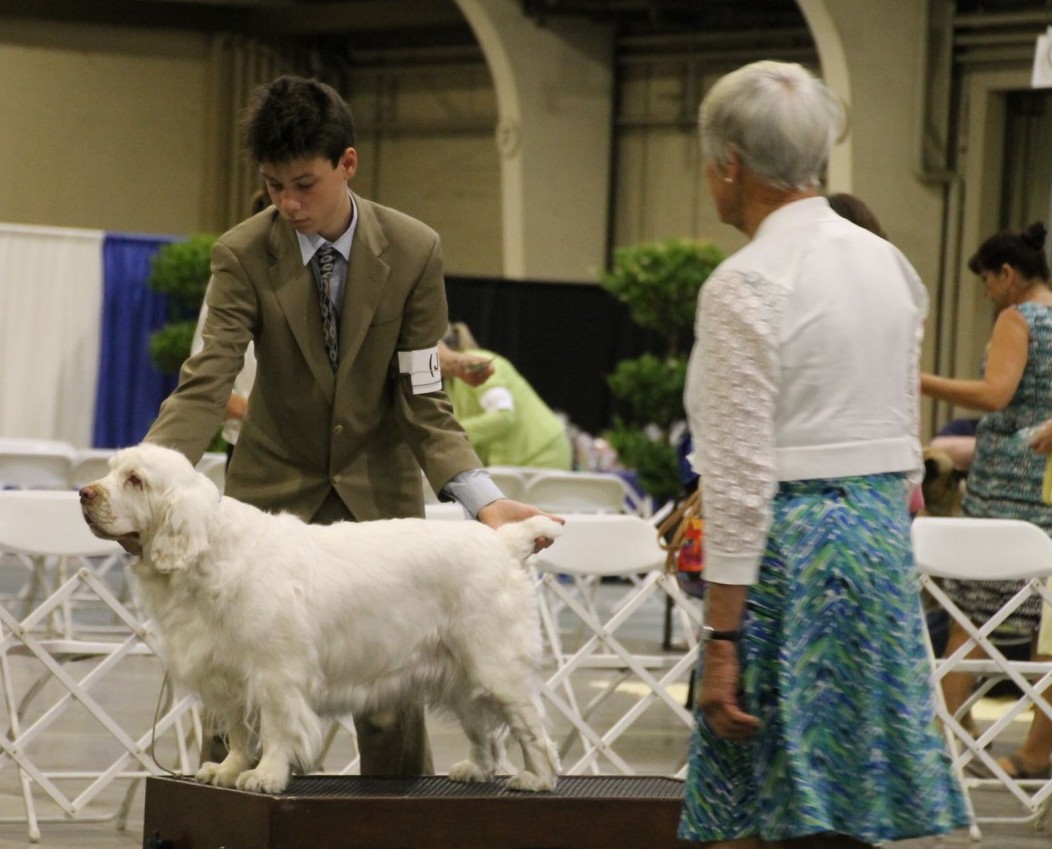 Kyle Bismore of Scottsdale, Ariz., and Josey en route to going Best Junior Handler at the Clumber Spaniel Club of Southern California 2017 Specialty under Judge Pluis Davern. Bismore went on to train a German Wirehaired Pointer puppy to be his current partner. The pair has qualified for the AKC National Championship in Orlando, Fla., and the Westminster Kennel Club show Junior Showmanship competitions. Photo by Jody Davidson.

“She loves people, especially kids,” Davidson says. “It’s what made her a good SAR dog. She enjoys showing and will ‘turn-on’ in the ring. She’ll stand for hours on the grooming table while a child bathes and trims her. Her best quality is her patience. She graciously tolerates their mistakes. If a beginner gives her even a vague semblance of the correct command, she’ll willingly do it. In the ring, if a foot gets set wrong, she will calmly reset it. She allows a child to simply concentrate on the basics while she serves as a willing teacher.”

After honing their skills and cultivating ring smarts with Josey, Davidson’s Juniors often move on to showing their own dog — usually one that is younger or more inexperienced.

Every autumn, each member of Davidson’s Junior group lists his or her five goals for the year. Some may be specific to Junior Showmanship — like qualifying for the AKC National Championship in Orlando or the Westminster Kennel Club Show in New York City — or particular to a breed. Some are personal, such as learning how to trim feet, helping a professional handler, learning to show a different breed, joining a dog club, or assisting new Juniors at shows.

Davidson estimates Josey will be exhibited at 15 to 20 shows this year, chiefly in the Southwest. “In addition to her time in the Junior Showmanship ring, our goals will be to get her last leg towards her Companion Dog and pick up the remaining 30 points for a Bronze Grand Championship in conformation.”

With her unwavering devotion and willingness to please, Josey has been an “exceptional partner” for Davidson. “I have developed a bond with her unlike any I have shared with another dog. I trust her implicitly. That’s not to say she’s perfect, but she has a very strong sense of fairness. She’s happy to learn anything you want as long as she sees the value. She is my heart dog and represents the same for countless Juniors, too.”