E-Collars Are so much Fun! (But for Whom?)

Those enormous plastic things that go around your pet’s neck after surgery should stop your pet from licking, chewing, or biting at the area that is supposed to be healing. They are meant to protect pets from irritating their incisions, opening stitches and letting their intestines peek out, licking a bad skin condition, and otherwise introducing new trauma to a spot that has already had some trauma. They are called Elizabethen collars after Queen Elizabeth I’s fancy neckwear.

The name is typically shortened to e-collar for convenience. Speed is everything in today’s society; what a difference three little syllables make!

Since the 2009 movie “Up”, the e-collar has also gained another popular nickname: “The Cone of Shame,” which has since become a permanent part of veterinary vocabulary.  E-collars are an essential tool in veterinary medicine; thankfully human doctors don’t prescribe them since people don’t tend to chew on their stitches. At least, most of us don’t, and you might want to keep that to yourself if you do.

Things you don’t expect can happen while pets are wearing those things. Some are hilarious and some are more on the scary side. (Note on the video: it’s dangerous for pets to put their head into an empty snack food bag because they can suffocate.)

Above and beyond bumping into doorways and the human getting bruised shins from the plastic equivalent of sheet metal, there’s the pet’s inability to go through a dog door so a human must staff the in-and-out-the-door-all-day-because-I-can activity for the duration. There’s the lack of vision leading a pet to “unexpectedly” encounter the couch or another pet (unless they pick up the habit of whapping the other pets with it just for fun). Your pet would like to eat, thank you very much, and pets are adaptive and resourceful enough that they can do so with it still on, despite a veterinary mandate to take it off during feeding.

What can happen in them is soo funny that one of humorist Dave Barry’s best columns was about his two dogs wearing e-collars at the same time. 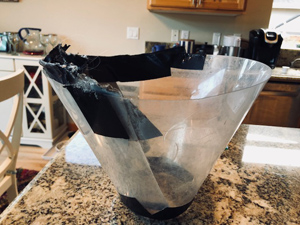 Some dogs are bent on destroying their nemesis, thus requiring the species with an opposable thumb to repair it using whatever means possible. Photo by Bobbie Daniel.

You don’t expect your dog to chew it into pieces, necessitating on-going repairs involving duct, electrical, or shipping tape.

You don’t expect your toy breed to get stuck behind the toilet.

You certainly don’t expect a dog to want the cone, but there is this one story about a Dachshund who had to wear one during the rainy season; it doubled as an umbrella so he refused to go outside without it after he didn’t need it anymore.

You don’t expect a dog to fight the need for it the entire time she’s wearing it, as dogs generally become resigned to the inevitable doom of wearing one. Not so Miso, a particularly strong-willed <coff coff> Malamute rescue who had a lesion removed from her elbow before she entered her new home. (What’s the difference between stubborn and determined, since the first has a negative connotation and the second has a positive one? They’re only stubborn when they’re in your family.) Courtney Bolin-Walker described the one-week duration of Miso’s active efforts to get the cone off: 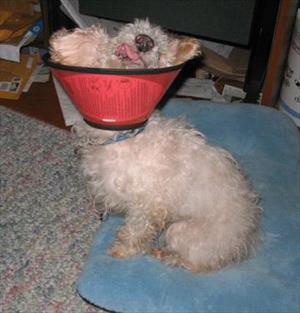 Some dogs give a raspberry to the general idea of wearing an e-collar. Photo by Phyllis DeGioia

“Miso came into the house, mad as hell about the cone, and decided that we were going to suffer every moment she had to wear the cone. Coming up the stairs, inside or outside, she lowered her head just enough that the cone caught every step. Being its own amplifier, the thud made by the cone reverberated off walls. You would not believe the look of satisfaction on her face when she made eye contact from the top of the stairs.

“We used to have a long empty wall between the living room and kitchen. Every time she walked through the hallway, Miso took a step closer to the wall so her cone would scrape along its full length. At the end of the hall where the wall ended, she would scoop her head down and then up for maximum flourish when the cone scraped off the end of the wall. It was equivalent to a sassy hair toss, only much more spiteful.

“She asked every time she scraped the wall or bumped up the stairs how long we were going to do this to ourselves. All we had to do was take off the cone and the torture would be over. So we took off the cone…when the stitches were removed.”

At least Miso moved in it, despite her snotty disdain for it. Some dogs simply refuse to adapt: they won’t take a step, they buck like a bronco, they cry every moment it’s on. Sometimes you have to accept that this is the case, but not without all-out effort. The medical consequences of not wearing protection can be painful and expensive. 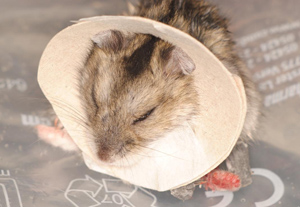 Cats and dogs aren’t the only ones who need to wear an e-collar. This hamster’s e-collar was fashioned out of cardboard. Photo by Dr. Estella Böhmer.

Dogs and cats aren’t the only pets who need to wear the Cone of Shame. Ferrets are notoriously difficult as they manage to get out of their e-collars fairly rapidly. Birds and rabbits use them. Tiny mammals wear them (hamsters are similar to ferrets in their ability to get e-collars off). Sometimes veterinarians have to get creative and make DIY e-collars with x-ray film, cardboard, or foam pipe insulation. It’s particularly difficult to place one on an animal whose neck and shoulders are approximately the same size (prairie dogs….snakes…).

E-collars can be decorated: get out the Bedazzler (for the exterior), non-toxic paint or markers for the interior, fabric, patterned duct tape. Use plaid for a Scottish terrier, bunnies for sight hounds, four-leaf clovers for Irish setters; how about some whimsical paw prints? Rubber stamp squirrels all over that thing! You’ll have way more fun than your pet will! Just make sure your pet isn’t ripping open an incision while you decorate. If your timing is right for Halloween, you can find some great choices. For a team costume, you could carry a telescope, as an astronomer might, and your dog can be a satellite dish.

The cones don’t hurt, but they’re annoying and can be scary to timid dogs. E-collars obstruct vision, change sounds, interfere with playing and eating. Every moment the pet is wearing one, life is different. Not only are they healing from something – typically surgery – but they’re dealing with a major annoyance. If you’ve been on crutches, you have an idea of what they’re experiencing; you can’t carry a cup of coffee, going upstairs is hard if not dangerous; and you’re not as stable as usual, but the crutches prevent pain and assist healing. 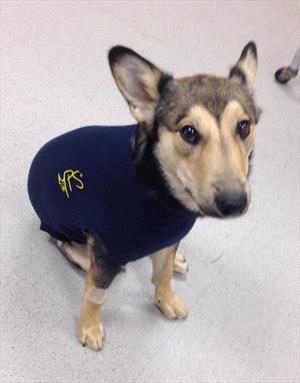 Some of what happens is quite stressful for pets: going up stairs, picking up toys, getting into the litter box or a crate, trying to scratch behind the ear, a sore neck from ramming into things they can’t see. Hard as it is not to make fun of them, it’s not nice to. I’d hate to be walking around with that kind of thing around my neck. It must be really frustrating. Senior pets with some cognitive dysfunction can be particularly stressed because change is confusing. Let’s show a little empathy here! Would you laugh at people in a cast? Well, okay, we would, but hopefully we’d do it behind their incapacitated back.

Thankfully, there are alternatives to the Cone of Shame, but your pet may be stuck in The Cone from Hell while you find an appropriate alternative. There are several kinds of padded fabric collars, some of which don’t extend beyond the pet’s face. Some have fabric with cute patterns. Body suits, sometimes called vests, shirts, or recovery suits, can be used. Your veterinarian will have a good idea of what might work best.

Whether you laugh and your pet cries, or vice versa, your veterinarian prescribed the e-collar for a valid reason and it should be used for the length of time prescribed by your pet’s doctor. Some pets will adapt faster and better than others, but their pace doesn’t change the reason it’s needed or the timeframe.