There’s An App for That

There’s An App for That 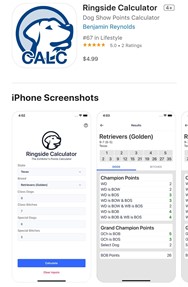 I had the opportunity to speak with Ben Reynolds, 26, developer of Ringside Calculator. Ringside Calculator is the newest, user friendly, cross platform AKC conformation point calculator, now available for a one- time fee for both IOS and Android ($4.99) that covers lifetime support. Ben spent five months creating this app after acquiring his first show dog, a golden retriever, and learning to count points as a new owner handler. The app was first released to positive feedback in late summer for IOS then recently to Google Play after Ben had to appeal a rejection from Android over the use of the term “bitches”, users will note the use of “males” and “females” when toggling between the two in Android format.
I asked Ben,  how he feels his app differs from competitors,

“Firstly, design and ease of use. I have implemented a number of quality of life improvements over other apps as well as a more appealing and modern design.

Another is that Ringside Calculator is able to be updated remotely. When the new point schedule is released, I won’t have to push an update to the AppStore, I can just update the database to include the new schedule. This means users won’t be at the mercy of Apple and Google’s app approval process, which can be wildly inconsistent.

I’m also very open to feedback and I encourage everyone to let me know if they’re having any issues with the app or have any ideas for improvements. Just yesterday I received an email from a user about ways the app could be improved and I am going to be implementing many of them in the next update.” 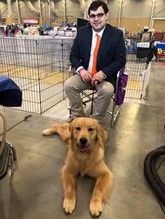